This elda seminar, held in summer 2016 in Kyiv, focused on propaganda as a key challenge to independent journalism, the public sphere and democracy. Participants from Azerbaijan, Georgia, Russia and Ukraine, most of them journalists, were offered practical insights and strategic reflection on the role and relevance of journalism in modern democracies as well as the challenge of old and new forms of propaganda.

A key result of the workshop was the campaign “young journalists against propaganda”.

In this special edition, held in June 2016 in Kyiv in cooperation with the UN-Youth-Ambassador-Program, elda invited participants from Ukraine, Moldova and Georgia aged between 15-20 years to discuss youth engagement in democratic politics.

In October 2015, the second edition of elda. was held in Odessa for participants from Ukraine and Moldova, focusing particularly on “Social Campaigning” (in cooperation with Institute Republika). The seminar was based on the elda-concept but was focused on the main competences and techniques of public communication in the context of digital media (social networks, Internet campaigning).

The first edition of the elda was held in Kyiv in December 2014 (organized with funding by the German Federal Foreign Office). Less than a year after the revolution on Kiev’s Independence Square, 20 participants from civil society and media were provided with a unique learning environment – to reflect on the developments of the past months and their role there-in as well as on the steps, capacities and mentalities necessary to foster democracy in Ukraine.

#Engage Black Sea provided a forum for young politicians and activists from Georgia, Ukraine, Moldova, Russia and Armenia to discuss and apply cutting-edge tools and approaches to foster social change and a more participatory democracy. Focusing on the impact of the internet on democracy, the workshop series took a phenomenon as a starting point which affects both East and West, transition countries and developed democracies alike. The seminars were held in Odessa, Ukraine, and Tbilisi, Georgia, in autumn 2017 and resulted in several social campaigns.

This project brought young journalists from Ukraine, Russia and Moldova together to discuss and work on the challenges of journalism in context of digitalization and the trend towards “fake news” and “post-factual” societies. This project was conducted in cooperation with the National University Odessa. The seminars were held in Odessa, Ukraine, and Chișinău, Moldova. 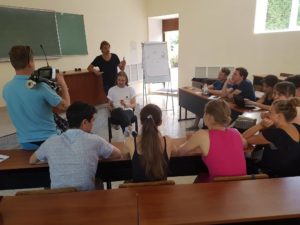